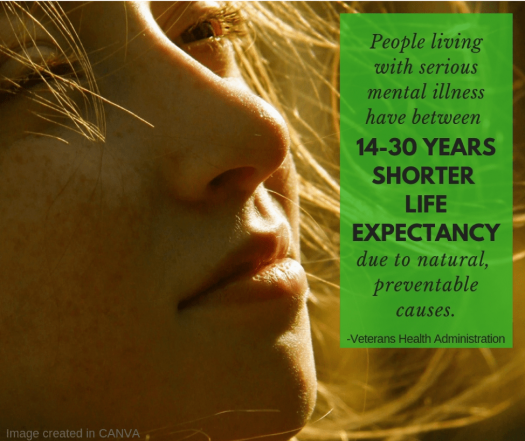 A large and growing body of research documents the sobering reality that individuals living with serious mental illness (SMI) die at rates between 14 and 30 years earlier than others as the result of natural, preventable conditions (JAMA Psychiatry 2015, Veterans Health Administration 2016, NIMH 2015). Two general categories can be used to describe the severity of mental health conditions. Any Mental Illness (AMI) and Serious Mental Illness (SMI).

The first category, AMI encompasses all recognized mental illnesses. AMI is common among adults in the U.S. In fact, nearly 20% of U.S. adults (44.7 million) live with some type of mental illness. SMI represents a much smaller subset of AMI. SMI is defined as mental, behavioral, or emotional disorder resulting in significant functional impairment, and limiting at least with one area of major life activity. In the united States 4.2% of all U.S. adults, 10.4 million, live with SMI (SAMSHA, 2017). The reduced life expectancy for those living with SMI represents a significant area of health disparity which, according to the National Institutes of Health, can be defined as,

a difference in the incidence, prevalence, mortality, and burden of disease and other adverse health conditions that exist among specific population groups in the United States (NIH, 2010).

The fact that individuals living with SMI face such greatly reduced life expectancy is disconcerting. Perhaps more frustrating is the evidence that deaths among those living with SMI tend to be attributable, in great measure, to preventable illness and disease. In a study published by the Journal of the American Medical Association Psychiatry, individuals with Schizophrenia were documented as dying more than 28 years earlier than others. These individuals lost,

28.5 years of life, primarily because of natural causes. Eighty-five percent of the premature deaths were due to largely preventable conditions such as high blood pressure, high cholesterol, diabetes, and heart disease (JAMA Psychiatry, 2015).

Similar patterns are documented in the National Veterans Health Equity Report. Individuals living with SMI and treated in VA facilities experienced reduced life expectancy resulting from preventable illness and disease like coronary artery disease. The overall reduction in life expectancy for members of the Veteran SMI population treated at VA facilities was documented on the lower end of the overall mortality gap at 14-18 years shorter life expectancy. Members of the Veteran SMI population treated at VA facilities exhibited high rates of hypertension, lipid disorders, and tobacco use, all factors which serve to increase the risk for coronary artery disease. Along with cardiovascular disease, coronary artery disease has consistently been shown to be leading causes of death among individuals living with SMI. The report also documented higher rates of dental disorders and housing insufficiency for the Veteran SMI population as compared to the Veteran population as a whole (Veterans Health Administration, 2016).

2. Include Health and Wellness Goals in Treatment and Service Plans

Support clients living with SMI in prioritizing and planning around health and wellness goals to include exercise, maintenance of healthy diet and weight, participation in regular preventative medical and dental care, and the avoidance of tobacco.

Excellent resources and information can be found via the National Alliance on Mental Illness web page.

National Alliance on Mental Illness. (2018) Mental Health by the Numbers.

Substance Abuse and Mental Health Services Administration (SAMSHA). (2017) Key substance use and mental health indicators in the United States: Results from the 2016 National Survey on Drug Use and Health. HHS Publication No. SMA 17-5044, NSDUH Series H-52.