Under the coordination and leadership of the Samueli Institute and the Consortium for Health and Military Performance (CHAMP) at the Uniformed Services University of the Health Sciences, the December 2010 “Military Medicine” magazine dedicated its entire issue to a new health paradigm that was then emerging for the U.S. military known as Total Force Fitness (TFF). Samueli Institute CEO Wayne B. Jonas served as a co-editor and as an author with military health colleagues, Dr. Patricia Deuster and Dr. Francis O’Connor from CHAMP. TFF has evolved in response to the nature of the Iraq and Afghanistan conflicts and the expectation that the U.S. Armed Forces will be similarly engaged in the years ahead. In an “era of persistent conflict,” successful execution of the military mission will require “…continuous optimal performance, resilience and recovery.”

As issue co-editor Col. Beverly C. Land wrote, not only are “Physical injury patterns from blast and (IEDs) clearly different … Not so easily identified and treated are the so-called ‘hidden’ injuries—hearing, vision, and now the more often diagnosed concussions, post-traumatic stress disorder, and anxiety. The personal and professional burden they create for our returning warriors is potentially overwhelming.”

The TFF initiative grew from the U.S. Army’s efforts to address these conditions so prevalent in today’s modern conflicts by consolidating a group of “strengths” for continuous evaluation: physical, social, emotional, family, and spiritual. In 2009 then Chairman of the Joint Chiefs of Staff Admiral

Michael Mullen broadened the focus to expand upon those domains and to create a framework that encompassed all branches of the service and incorporated the well-being of Service member families affected by deployments and the resulting consequences. In November 2009, Adm. Mullen tasked CHAMP to host a workshop of leading health specialists. Samueli Institute co-coordinated the event and contributed significantly to the establishment of TFF principles that were subsequently outlined in the special issue of Military Medicine.

CHAMP is the Department of Defense center of excellence for integration, translation, & education of all topics related to human performance optimization (HPO) and TFF and is a collaborative effort among operational, medical, and research communities and policy makers. 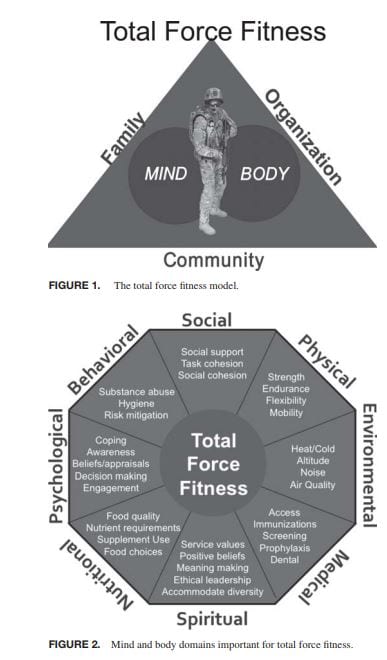 The results of the workshop expanded the number of fitness domains that constitute Total Force Fitness to include each of the following:

In 2020, the domains of TFF were reviewed and revised in CJCSI 3405.01A. The updated domains are: Social, Psychological, Physical, Financial, Ideological & Spiritual, Medical & Dental Preventative Care, Nutritional, and Environmental. 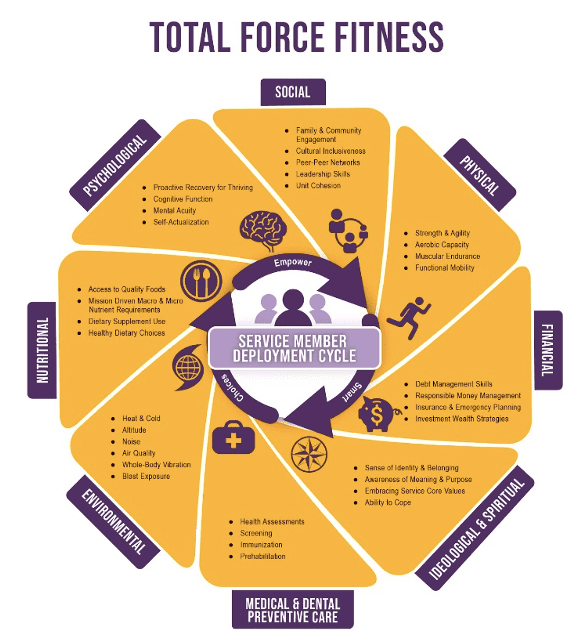 In her comments in the December 2010 “Military Medicine” magazine issue, Col. Land writes, “This program would be prevention-focused, individual-centric and the family would be recognized as central to the total force fitness equation.” She notes that TFF is part of the broader Department of Defense (DoD) emphasis, “to create a culture within DoD that values health and fitness and empowers individuals and organizations to actualize those values and achieve optimal health.”

The issue chapter “Why Total Force Fitness” sets out the rationale for adopting the holistic approach to armed services health requirements.“ The answer is that the current paradigm is failing.

The demands on current warfighters and their families are overwhelming the resilience capacity of our service members. The military services are experiencing rampant post-traumatic stress disorder (PTSD), scores of injuries, family casualties, and increasing suicide rates. The burden is high and the framework of the current response does not match the circumstance or need.

Subsequent chapters describe the potential within the primary domains to redress these conditions and to provide a coherent framework for enhancing the health of service members and their families. Samueli Institute, through its Military Medical Research program, has helped explore a number of these domains in partnership with military health leaders and unit commanders.

For additional information on TFF, visit CHAMP’s website, Human Performance Resources by CHAMP. Human Performance Resources by CHAMP (HPRC) is a team of scientists, specialists, and support staff who translate research into evidence-based resources to help Warfighters and their families achieve total fitness and optimize performance, whether at home, in the office, or in theater.

From the standpoint of OneOp and our continuing efforts to leverage the Cooperative Extension System (CES) as a force-multiplier for family readiness, the Total Force Fitness program offers an excellent opportunity to showcase how  CES programs and expertise, derived from the Land Grant Universities that CES resides within, can supplement, enhance, and catalyze resilience and health in each of the TFF domains.

Friday Field Notes will continue to feature evidence-based best management practices from across the Cooperative Extension System, linking them explicitly to specific TFF domains.  It is our hope that this effort will make it clearer how the CES is a fundamental part of the Total Force Fitness equation.

Adm. Mullen (Ret) writes in the introduction to the special issue:

Total force fitness is more than a physical fitness; it is the sum total of the many facets of individuals, their families, and the organization in which they serve. It is a state of being.

He encouraged the military health and military families communities to: “Keep your minds open to creative new concepts and possibilities. Critically evaluate the role of complementary and alternative medicine. Explore the anecdotal evidence regarding total force fitness and then develop scientific protocols to put these observations to objective tests … ” OneOp is taking up his challenge.