Today, over 210,000 women serve on Active Duty (AD) across the military services (Army, Navy, Marine Corps, and Air Force), and another 5,955 serve in the Active Coast Guard, according to the Defense Manpower Data Center. This number represents 16% of women in the total enlisted force and 18 percent in the officer corps (Reynolds & Shendruk, 2018).

Overall, there’s some diversity in the total percentages of AD women in each military branch, including: 20.2% Air Force, 19.7% Navy, 15% Army, 14.5% Coast Guard, and 8.6% Marine Corps (2018 Annual Report . Defense Advisory Committee on Women in the Services; DACOWITS).

These percentages hold the highest number of women who have served in the military since World War II (Taylor, 2019). However, women are still severely underrepresented across all military service branches today (Reynolds & Shendruk, 2018).

Female Service members (SMs) face unique challenges that contribute to relatively few joining the military and not many staying in long enough to become officers (McKay, 2019).

Servicewomen still face gender discrimination, and an alarming number are victims of sexual harassment and assault (McKay, 2019). There are also other issues that keep recruitment and retention of women in the military low. “For example, equipment such as body armor is made to fit men and must be customized to women’s bodies” (McKay, 2019).

The Defense Advisory Committee on Women in the Services (DACOWITS) is mandated to advise the U.S. Secretary of Defense (SecDef) on matters and policies related to women serving in the Armed Forces of the United States. Every year, DACOWITS publishes a comprehensive report on topics the SecDef has requested the community to examine. Each report provides findings and recommendations based on multiple sources. 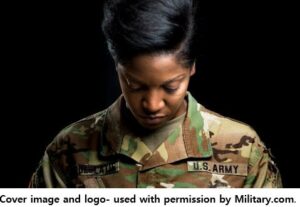 DACOWITS’ 2018 report spotlights how the increase in women in our Armed Forces is necessitating changes to an array of policies and programs. The report includes nine key recommendations covering a range of issues affecting female SMs, including recruitment and retention, gender integration, parental leave policies, and transition assistance.

Women in the military face unique challenges, including retention, military sexual trauma and gender discrimination, and transition assistance. Each challenge is highlighted below, with a section introducing the concern by providing current research as it pertains to Servicewomen today. The segment is concluded by providing a corresponding recommendation of the challenge from the 2018 DACOWITS report.

Findings from recent studies indicated that women’s family and military roles are closely linked. Women who marry, become pregnant and have children leave the military at higher rates than single Servicewomen (King & DiNitto, 2019).

In addition, DACOWITS found that, “women leave the military at higher rates than their male counterparts at the junior and mid-field grade.”

Some suggest that many women who would like to remain in the military but leave do so because they perceive that military policies do not support women’s roles as mothers (Goodman et al., 2013).

Women indicated that they were not treated as equals to their male counterparts, which contributed to their departure from the military (DACOWITS, 2018).

In an attempt to increase retention rates among Servicewomen, DACOWITS has recommended improvements in parental leave. They have recently made great strides in this area, but more work needs to be done. On January 28th, 2016, the Department of Defense (DoD) implemented a maternity plan that includes 12 weeks of continuous leave after childbirth across all services (DACOWITS, 2018). The National Defense Authorization Act for Fiscal Year 2017, Section 521 increased the allowable leave for secondary caregivers (formerly paternity leave) from 10 to 21 days. This was only increased among the Air Force, Army, and Coast Guard, as the Marine Corps and Navy allotted only 14 days.

The Secretary of Defense should mandate the consistent application of 21 days of leave for secondary caregivers across all military services to be consistent with the maximum allotment afforded in the National Defense Authorization Act for Fiscal Year 2017.

Sexual harassment and gender discrimination in the Armed Forces remain important issues related to the well-being of women in the military. Military sexual trauma (MST) is the term used to describe sexual assault or harassment that takes place during military service (VA.gov, 2019).

The Department of Veterans Affairs (VA) reports that while in the military 23% of women reported sexual assault and 55% reported some form of sexual harassment. DACOWITS has been assessing issues related to sexual harassment regularly since 1980. During 2018 focus groups, participants indicated gender discrimination and sexual harassment were occurring and were more common among SMs in the junior ranks—typically, those in pay grade E-5 and below (entry-level pay grades). Some focus group participants reported how gender discrimination can create a negative perception of women and lead to a toxic work environment.

A (2014) RAND study demonstrated similar findings, in that sexual harassment can be “a gateway offense to more serious transgressions”. For example, approximately one-third of SMs who were sexually assaulted were first sexually harassed by the offender (RAND, 2014). The study found that “26% of AD women and 7% of AD men experienced sexual harassment or gender discrimination in the past year,” and that “close to one third of women in the Navy and Marines experienced one of these violations in the past year.”

These statistics are alarming for both men and women. Women are more likely to face sexual assault, harassment, and discrimination while serving their country, crimes that are solely based on their gender. While both women and men are susceptible to MST and gender harassment, women are 20 times more likely than men to be assaulted during their military service (Southwell & MacDermid Wadsworth, 2016).

The Secretary of Defense should conduct a comprehensive assessment of the effectiveness of the Military Services’ policies, standards, training, and enforcement to eliminate gender discrimination and sexual harassment.

7% of all U.S. Veterans are Servicewomen, and they represent the fastest growing subgroup in the military (Schiavone & Gentry, 2014). “When it pertains to transitioning home post-military service, women Veterans may grapple with factors that differ from their male counterparts” (Albright, Thomas, McDaniel, & Fletcher, 2019, p. 1).

Due to the change of women’s roles in the Armed Forces, the prevalence of post-traumatic stress disorder (PTSD) has increased (Crum-Cianflone a  Jacobson, 2014). Female Veterans who have had exposure to MST are at higher risk of developing PTSD (VA.gov, 2019). Research has shown that OIF/OEF/OND women Veterans who experience MST are five to eight times more likely to develop PTSD compared to those with no history of MST (Calhoun et al., 2016).

Many female Veterans present with multiple diagnoses such as having anxiety and depression or PTSD and substance abuse (Albright et al., 2019). Thus, a need for mental health services, such as the ones offered through the VA, should be noted as a priority for this population of women.

To better support the increasing numbers of women who leave the military and enter the VA support system, the Air Force and VA partnered to offer the Women’s Health Transition Pilot Program , a new, 1-day supplemental workshop offered as part of the Air Force’s transition assistance program.

According to the Secretary of the Air Force Public Affairs (2019), “the program is an in-person and virtual course designed to provide a female perspective to AD, Reserve and National Guard Servicewomen who plan to transition to civilian or Reserve/National Guard status.”

This pilot program has been well received by women who have participated and has been identified as a best practice by DACOWITS because it informs participants of the resources available to Servicewomen through VA.

DACOWITS believes the expansion of the Air Force’s Women’s Health Transition Pilot Program or programs similar to it should be made available to all Servicewomen.

The Secretary of Defense should direct all Military Services to improve their support to AD women transitioning to the Reserve/Guard or civilian sector by offering programs similar to the Women’s Health Transition Pilot Program, a best practice implemented by the Air Force in partnership with the Department of Veterans Affairs.

As service providers and educators, there are ways that we can put DACOWITS recommendations into practice:

⮚ In support of retaining Servicewomen, explore options to minimize the negative barriers they experience.

-For example, connect with unit leadership allowing female SMs to delay their promotion windows to account for time away due to pregnancy or adoption.
-Continue to explore ways to improve childcare options for SMs and families.
This tool, from Military OneSource , provides SMs a list of local child development centers.
-Examine basic gender differences in retention trends, such as potential differences within job specialties.

⮚ To reduce and even eliminate MST and gender discrimination among all SMs, we can:
-Evaluate current sexual assault and sexual harassment training received by SMs.
-Improve programs and educational resources to increase reporting of the range of sexual assaults, including those not perceived as sexual acts (e.g., hazing or bullying).
The VA offers a community provider toolkit to help providers who want to learn more about MST and MST-related services.
-Provide leadership training that emphasizes the importance of mentoring other SMs, especially reaching female SMs in junior ranks.

⮚ To better assist Servicewomen and female Veterans throughout various military-related transitions:
-Prioritize mental health services for this population of women, such as ones offered through the VA and Military OneSource.
-Refer female Veterans to attend programs with transition-related support or the 1-day workshop offered by the Women’s Health Transition Pilot Program.

⮚ Finally, add these resources to your “toolbox” for working with female SMs and women Veterans .

This article was written by Jennifer Rea, PhD and military spouse to an Active Duty Marine. Jenny consults with the OneOp Family Transitions team to support professional development for military family service providers. You may find blog posts, podcasts and webinars from Family Transitions here. We invite you to engage with Family Transitions on Twitter @MFLNFT and with OneOp on Facebook @MilitaryFamilies.