The Family Development Early Intervention team is always on the look-out for quality children’s books that help address some of the unique needs of military children.

The following is an interview with Seth Kastle, author of two popular children’s books, Why Is Dad So Mad? and Why Is Mom So Mad?, both dealing specifically with PTSD in parents.  This interview has been edited for length and clarity.

What if any experiences do you have with the military?

I retired from the Army Reserve in 2014, after 16 years in service. During my career I served as a Logistician, Infantryman, a Drill Sergeant, and a Company First Sergeant. I deployed in February 2002 to Qatar, and then in April to Mazar-E-Sharif Afghanistan until September of that year. I deployed for the initial invasion of Iraq in January of 2003 until April of 2004; I spent the majority of this tour in Mosul. I had to have a pacemaker implanted in 2010, which made me ineligible to continue my military career.

What made you decide to write this book? Was there some incident or experience with the military that inspired you?

I wish I could say that I was a completely benevolent person, and I simply wrote this book because I knew there was a greater need, but that is not the case. I wrote this book because of personal need. I was looking for a way to explain who I am now to my children and I could not find resources that achieved this purpose. I sat down and wrote the book along with illustration notes after a bad day at work. It took me about 30 minutes. I then did what a lot people who write do…I filed it away on my computer, never to be seen again. I had a friend who had just published a book on succeeding as a foster child who kept prodding me to take the steps to make publication a reality.

Opening up and talking about my journey with PTSD has been extremely difficult for me. This is not something that is talked about much as there is a stigma that goes along with PTSD. There was hardly anyone who knew I was having problems. In fact, only my wife and two to three friends that I had been in Iraq or Afghanistan with were aware of my struggles. It was because I knew there was a large need for a book like this, that I was pushed into actually publishing it.

What message do you hope that children of families receive as a result of reading these books?

The thesis statements of the books are that even though Dad (or Mom) gets mad often, it is not the child’s fault. In the books I use metaphors to illustrate to children what is happening inside Dad (or Mom) when they get angry. Parenting is tough, even without additional obstacles; parents with PTSD have a harder time dealing with a lot of the common stressors of family life. It does not mean they do not love their children or care about their children’s feelings. 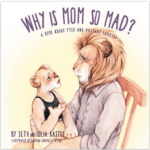 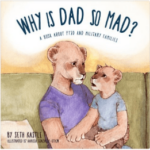 Have you received any feedback from military families after they read your book, and if so, what have they said?

This has actually been the most rewarding part of the entire book project coming to life. I have literally heard from hundreds of military families that have read my books. They have thanked me for writing the books, and they explained how this book helped them explain to their children what is happening with their Dad (or Mom). These books are not a magic fix for PTSD and family dynamics; my hope though is that they are set the stage for starting conversations. One email that sticks out in my head was from a Veteran who wrote to me and said, “You know that look your child gets the first time they understand something, my son got that look tonight when I read your book to him.” I have also had a number of Vietnam Veterans and their families reach out to me and say that they wished they had had this book 30 years ago. Some of them have even said that they bought the book for their adult children to help them understand now why things were the way they were when they were growing up.

Do you have plans to write another book that focuses on the military? If so what is the focus of that book and when might we expect to see it?

I feel like there needs to be a book that explains divorce to military children. The national divorce rate is high and the military is no different. I feel a large part of why my books have been successful is because they were written based on my experience, so they were true to life. Divorce is not something that I have experienced so I may not be able to do the book justice. To do it right I would need to, at a minimum, collaborate with a service member who has been through a divorce.

The OneOp team has put together a one page guided discussion handout for both of Seth’s book  which providers can use with young children and their families.  You can access the handout for Why Is Mom So Mad? here and Why Is Dad So Mad? here.

This post was edited by Robyn DiPietro-Wells & Michaelene Ostrosky, PhD, members of the OneOp FD Early Intervention team, which aims to support the development of professionals working with military families. Find out more about OneOp FD concentration on our website, on Facebook, on Twitter, and YouTube.