I didn’t personally know anyone deploying, but attended to show my support for the Service members and their families. The experience was moving. From the moment I walked into the Aberdeen Central High School and watched the gymnasium fill up with family, friends, employers and community members, I was reminded of the ripple effect deployment has on everyone throughout a community. Greeting attendees at the doors of the high school were members of the local Freedom Riders. Support for our Service members is shown in a variety of ways and from many sectors of the community. 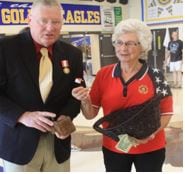 Just outside the gymnasium, members of the local VFW Auxiliary were handing out buddy poppies. The proceeds are used for aid, relief and comfort of veterans and members of the armed forces and their dependents who are in need. 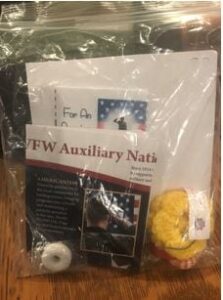 included a listing of available resources, messages of gratitude and items to remind us to keep the Service members in our thoughts and prayers. My favorite items were these little Army men with the message “Please take a soldier home as a reminder of the men & women serving our country”. 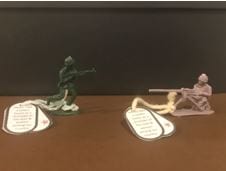 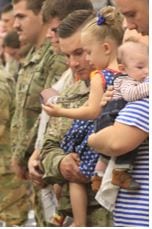 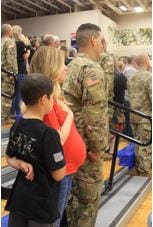 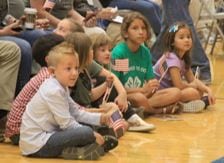 Several of the speakers also spoke about mission readiness and the focus that requires. Major General Marlette acknowledged that the Service members know their jobs – they are well trained, well equipped and well led. However, Service members often times worry about their families. He encouraged everyone to reach out and provide needed support so the Service members can stay focused on the mission. He challenged the Service members to stay mission focused – on safety, standards and discipline. Commander Captain Craig Evenson, spoke of the challenges in front of the community. He indicated the Service members should expect hard work and that families need to always place mission first. Governor Noem stressed that strong families make for a better tomorrow, and deployment events such as this, drive it home. 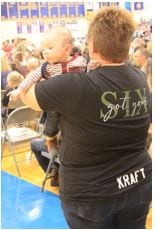 Governor Noem also commented on the t-shirts that many of the family members were wearing, which stated “Got your six” on the back of the t-shirt with the name of their Service member. She encouraged the Service members to bring each other home and challenged them “to be strong enough to stand alone, smart enough to ask for help, and brave enough to ask for it.” This same advice could apply to the families as well.

The ‘roll call’ portion of the ceremony was an emotional time for many Service members and families. First Sergeant Breen read off the names of each deploying Service member, who in turn stood up from where they were sitting with family members, and responded “Here, First Sergeant!” The Service members walked to the front of the gymnasium to shake hands with the dignitaries a

nd  then returned to their families, but remained standing. For me, this was so symbolic of who was giving the greatest sacrifice. Earlier in the ceremony, Governor Noem quoted the great Teddy Roosevelt speech, “The credit belongs to the man who is actually in the arena, whose face is marred by dust and sweat and blood; who strives valiantly; who errs, who comes short again and again, because there is no effort without error and shortcoming; but who does actually strive to do the deeds; who knows great enthusiasms, the great devotions; who spends 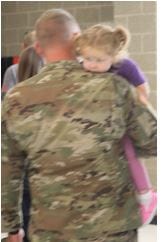 himself in a worthy cause; who at the best knows in the end the triumph of high achievement, and who at the worst, if he fails, at least fails while daring greatly, so that his place shall never be with those cold and timid souls who neither know victory nor defeat.”

Kudos goes out to the South Dakota Army National Guard on a well done activation ceremony. For the Service members and families— may you focus on mission, seek support when needed, and support one another along the way.